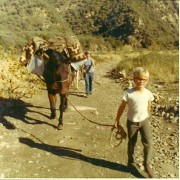 This year from March 20 through April 18 the sun is in the astrological sign of Aries. The symbol representing Aries is the ram, its element is fire, its ruling planet is Mars.

My brother and I grew up spending our summers with our parents in the Sierra Nevada Mountains of California.  Horse trailer loaded, we headed for the hills.  We’d stop on the way to buy staple foods and simple necessities like mole skin for our soon to be blistered feet, and fishing bait.  At the trail head with packs weighted by the well seasoned camp kitchen, grain, fishing poles, and bedding, off we’d go for weeks at a time into our new uncharted territory of the High Sierra.
A couple of days into the back country my brother would shift into high gear and just take off up the trail.  This was his habit.  His nature of heading out into the wild, alone.  After quite a jaunt, with the horses, the rest of us would show up at the intended destination, there John would be, looking bored, “What took you so long?”, “Slow pokes”, or some other biting remark.

Up the loose rocks and gravel of Black Rock Pass was one of our most torturous trips.  Tonight after Googling “Black Rock Pass switchbacks” the mention of the “grinding, grueling, endless trudge” brings the demanding trek to mind. Above the timberline, the hot sun reflecting off the rocky trail, I recall squinting up to see the switchbacks zigzagging into oblivion.  The family mood on that pass was heavy. The horses tripped more than occasionally from fatigue.  The blisters on my feet were making it hard to continue to walk.  Things were downright miserable.  I was wondering where my brother was, and my parents must have been a bit concerned too.

Just around one of the hairier twists of the trail I looked up to see John about the size of a pea, sitting on a rock way, way up at the top of Black Rock Pass.  It must have been a few miles up and he was there, alone for hours, waiting to greet us with his nonchalant, elbow on his knee, chin in hand, fingers tapping cheek, “Where have you been?”  I just wanted to kill him.

Can you guess that my brother has his sun Aries.  He is there first.  He knows how to climb a mountain.  See his blog jrowe2020.wordpress.com  He will butt heads in a big way when things aren’t going his way.  He goes for it without waiting for anyone. His inner machine runs on adrenaline.  And one of my brothers best trait is that if you are in the hospital he will rip the doctors a new one in order to get what he wants done, done….even if he IS in Saudi Arabia and the doctor in California.  AND, if you insert medical genius where Matt Damon speaks math genius, the movie “Good Will Hunting” and Matt Damon’s character sums it up nicely ….and so does this video:

And so does THIS story.

Tale for a Pisces