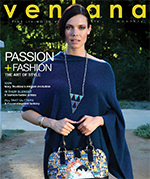 All That Glitters
A Frozen-inspired fantasy

5 fashion-fueled artists merge form and function in a variety of mediums
By Nancy D. Lackey Shaffer Photo by Beth Backer
laine Unzicker’s designs beg to be touched. Which is surprising, considering “sensual” is not a word most of us would associate with something as cold and hard as metal. But that’s one of the great beauties of her work: achieving a soft and almost delicate quality from stainless steel and anodized aluminum to make a fabric with wonderful movement and fluency. Exploring the tension between masculine and feminine, hard and soft, heavy and light is what drew Unzicker to chain mail in the first place.
Originally trained as a jewelry designer and sculptor, she first began working with the medium at Illinois State University, where she pursued an MFA. “I started patterning in chain mail—something no one had ever done before,” she recalls. Her designs are comfortable, flattering, and chic. “I need to know how the weight is distributed, how it lays on the body, moves on the body,” she says, explaining that she solders where necessary. Her chain mail shirts, scarves, skirts, and other articles are not exactly weightless, but they are effortless to wear, with an almost comforting quality. “Many people describe it as a hug,” she says. Extremely durable and completely snag-free, they are also unlike anything else on the fashion scene.unzickerdesign.com Much of Dolores Barrett’s jewelry would be perfectly at home in a Shag painting. Her glass creations run the gamut of Atomic Age shapes and share the palette, too: electric blue, sea green, fiery reds, and oranges. This Midcentury Modern sensibility comes naturally to her, because it’s what she grew up with. Mad Men resonates with me,” she says. “I could have been Sally Draper.” Whimsical her designs may be, but their refined elegance is evident at first glance: satiny smooth and vibrant, often studded with Swarovski crystals or precious gemstones, gleaming with an inner fire. Eye-catching is an understatement.Her medium is fused glass, a distinctly different art form than the more familiar blown glass; it utilizes a kiln rather than a torch. With this technique (and the clever use of molds, epoxy, and a sandblaster) Barrett can achieve three-dimensional orbs with portals that peek inside the piece, revealing contrasting colors and/or textures. “You get drawn in by looking at it,” she says of these “windows” she creates. “It invites intimacy.” Whether it’s a geode-like orb, a shadowbox pendant, or a personal scent bottle, Barrett’s jewelry always bears a closer look. barrettart.net Teal Rowe. Glass garments that go with the flow

Teal Rowe was always drawn to the glitter of glass. “When I was a little girl, I’d see a cracked windshield and think it was like jewels,” she recalls. Her career as a glassblower evolved from painting, charcoal, and jewelry making. But what ultimately captured her imagination was the transformative power fire had over glass, creating a living, moving, viscous entity that maintained a ghost of its former fluidity in static form. A lifelong talent for sewing inspired her most ambitious project yet: magnificent glass dresses. Individual glass pieces are crafted separately and then carefully connected and fit to a plaster cast. “It can take a lifetime to make one,” Rowe says, explaining that each piece builds upon the other. It also requires a completely Zen-like mindset: “You can’t do glass and not be in the moment. I can’t think about anything else but what the glass is saying to me.” Preserving the mutable quality of her medium is just as important; she goes to great lengths to maintain a sense of movement. As amazing as these pieces are in photos or on a mannequin, Rowe acknowledges that they really are best seen in person and in motion. “It’s almost like performance art.” tealrowe.com Where art meets culture meets fitness meets philosophy is where you’ll find Patrick Fisher. The artist, designer, and personal trainer has a lot of irons in the fire, but they’re all connected in some way. Fisher doesn’t compartmentalize his life. His fitness studio, Gamut, for example, is about more than just working out, incorporating elements of nutrition, meditation, art, and spirituality to help clients find their way to joy and fulfillment as well as good health. His own artistic health benefited from the same approach. “I was training eight to ten hours a day,” he recalls. “Basically killing myself with fitness. But I didn’t eat healthy, I wasn’t meditating, I wasn’t making art.” His canvas acted as a catalyst: he took a step back from his grueling job, started his own business, became a vegan, found balance. He started designing to promote Gamut, but his popularity has grown beyond the gym. At Studio Channel Islands Art Center’s November fashion show, Fisher showed his street art- and skateboarding-influenced apparel—and sold out his entire stock that night. His describes his tanks, long-sleeve shirts, and hats as “bridging the gap between fitness, art and, street wear.” Because Fisher’s world is about the links that connect the disparate facets, not the walls that separate them.gamutlife.com Deborah Jarchow. A wearable tapestry of color and texture

It was exciting to learn that working with fiber was one way of being an artist,” says Deborah Jarchow of her lifelong passion for knitting and crochet. But weaving is where she found her true calling. The loom opened up creative doors for her that the knitting needles never could. “I design my own stuff when I weave,” she explains. “And I feel freer to design my own knitted garment when the base is woven.” Jarchow is most inspired by the colors and textures (as opposed to the patterns) she can create through weaving. Using 40 or 50 shades in one piece is standard. Unlike paint, where the blending of colors transforms them all into something new, woven threads maintain their chromatic integrity. “The colors sing together,” she says. “They don’t get lost.” She’s also extremely tactile, weaving by hand on large wooden looms and handling her yarn extensively to find out “what it wants to be.” This hands-on approach enables her to bring out the best in her materials: a Jarchow poncho, ruana, scarf, or other creation is full of deep, rich color and unbelievable texture. “Wearable art is such an appropriate expression,” says Deborah Jarchow. “You can wrap yourself in a beautiful piece of art. That is so appealing!”deborahjarchow.com