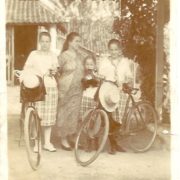 The epidemic arrived at my grandmother’s house in the year 1911 near Malang, Java, Indonesia.  The youngest sibling, Thyrsa, woke one summer morning to a lifeless rat curled up next to her warm body.  That was the day the family realized that their lives would never be the same.

After watching her parents help others in the community who had been touched by sickness and loss to the plague, my grandmother never thought it would happen to her.   She said it seemed that by being of service to others, the plague just maybe would miss them.  The common grace of denial can work for a while.  “It won’t happen to me/us”.

The plague was originally brought to Java on a rice shipment from Burma, spread through the island by fleas and rats, and had now infested this family’s home.  Although her parents tried to prepare their seven young children for what was next, my grandmother said she could not have imagined the events that followed.

They were not allowed to take any belongings from their house.  Everything had to be burned.  She recalled impatiently waiting for nightfall.  “They came walking through the jungle” she whispered in her Dutch accent.  A large group of men from the village, each dressed in white loincloth. The torches of flame they carried flashed in reflection from the coconut oil slathered on their bare chests.  The oil was commonly used to prevent the fleas from jumping on, and spreading the disease through a bite.

A safe distance away from the commotion, my grandmother described the waves of heat she felt radiating from the flares.  She and her siblings watched as the men ignited a line of fire to the base of the bamboo walls.  In one sweep the fire rose, and their house swiftly crackled with a blaze reaching high into to the thatch roof.  The men’s yelling echoed through the night, rising above the sound of the flames scorching the house.  One by one, the rats frantically scurried for air, away from the glowing thatch.  Light on their feet, and bodies shining in the firelight, the men clubbed each rodent to death and threw it back into the burning home.   They worked well into the early morning hours until the house and all the rats were left to a pile of ash.

The youngest sister was the only family member who had contracted the plague.  They believe it was from the dead rat in her bed that summer morning.   When the symptoms arose, her mother immediately took the child and did what she had previously done with the others from the village as they had displayed illness.

This is Daisy Dolly Heyting Hassall’s story, my grandmother.  She has been gone almost 30 years and I still hear her telling me her stories of the plague.