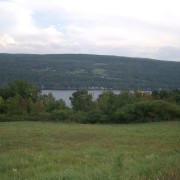 In April I was asked what my hesitations were about doing a job I was being interviewed for-?  Emphatic and over reacting to the question, I responded with “LACK OF MY OWN MY CREATIVITY!” ….. and then……with about just as much gusto as my response to NOT wanting it….. I accepted the job when it was offered.
I am now coming down from the summer of working in a corporate glassblowing job which has kicked my butt on one hand, and landed me in one of the most beautiful places in the world on the other. The butt being kicked?  So many ways….. one of which is my wounded foot from a bicycle accident I had on the way to work.  While, being the great employee that I am, I kept working on and stomping around in the studio on for the last 2 weeks of the job.

And, now the job is over, I allow my foot to heal here at the southern end of Keuka Lake, NY, one of the most spectacular places I’ve seen.   Fall is on the way.  Fall is here.  Daily.

The Bells
Scroll to top